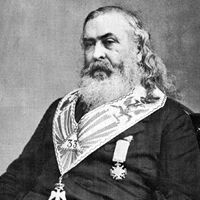 BE PREPARED - to have hairs stand up on the back of your neck!
Above picture of Albert Pike

Masonry's illustrious leader and illuminati, Albert Pike’s 1871 letter to Mazzini is below. It proposed three world wars needed to accomplish their Luceferian purposes. Giusseppe Mazzini of Italy (1805-1872) who was a 33 degree Mason, who became head of the Illuminati in 1834, and who founded the Mafia in 1860. Mazzini was a high-level planner for the Italian revolution in 1848. Together with Mazzini, Lord Henry Palmerston of England (1784-1865), and Otto von Bismarck of Germany (1815-1898)—all 33 degree Masons—Albert Pike used the Palladian Rite to bind all Masonic groups under one umbrella.

“The First World War must be brought about in order to permit the Illuminati to overthrow the power of the Czars in Russia and of making that country a fortress of atheistic Communism. The divergences caused by the "agentur" (agents) of the Illuminati between the British and Germanic Empires will be used to foment this war. At the end of the war, Communism will be built and used in order to destroy the other governments and in order to weaken the religions.”

“The Second World War must be fomented by taking advantage of the differences between the Fascists and the political Zionists. This war must be brought about so that Nazism is destroyed and that the political Zionism be strong enough to institute a sovereign state of Israel in Palestine. During the Second World War, International Communism must become strong enough in order to balance Christendom, which would be then restrained and held in check until the time when we would need it for the final social cataclysm.”

“The Third World War must be fomented by taking advantage of the differences caused by the "agentur" of the "Illuminati" between the political Zionists and the leaders of Islamic World. The war must be conducted in such a way that Islam (the Moslem Arabic World) and political Zionism (the State of Israel) mutually destroy each other. Meanwhile the other nations, once more divided on this issue will be constrained to fight to the point of complete physical, moral, spiritual and economical exhaustion…We shall unleash the Nihilists and the atheists, and we shall provoke a formidable social cataclysm which in all its horror will show clearly to the nations the effect of absolute atheism, origin of savagery and of the most bloody turmoil. Then everywhere, the citizens, obliged to defend themselves against the world minority of revolutionaries, will exterminate those destroyers of civilization, and the multitude, disillusioned with Christianity, whose deistic spirits will from that moment be without compass or direction…will receive the true light through the universal manifestation of the pure doctrine of Lucifer, brought finally out in the public view. This manifestation will result from the general reactionary movement which will follow the destruction of Christianity and atheism, both conquered and exterminated at the same time.”


Some think the greatest Freemason who ever lived was Boston-born Albert Pike, an obscure ex-Confederate Civil War Brigadier General. He was also founder of the Supreme Council 33rd Degree, Mother Council of the World the Illustrious Albert Pike 33rd degree, Sovereign Grand Commander of the Supreme Council 33rd Degree Ancient and Accepted Scottish Rite, Mother Council of the World. Albert Pike re-wrote the degrees of the Scottish Rite of Freemasonry and instituted the diabolical Rite of the Palladium to dominate Freemasonry. Pike served Freemasonry as the Grand Commander of North American Freemasonry from 1859 until his death in 1891. Pike occupied simultaneously the positions of Grand Master of the Central Directory at Washington, D.C., Grand Commander of the Supreme Council at Charleston, S.C., and Sovereign Pontiff of Universal.

Pike also was one of the most physically and morally repulsive individuals in American history. Weighing well over three hundred pounds, his sexual proclivity was to sit naked astride a phallic throne in the woods, accompanied by a gang of prostitutes. To these orgies he would bring one or more wagonloads of food and liquor, most of which he would consume over a period of two days until he passed into a stupor. In his adopted state of Arkansas, Pike was well known as a practitioner of Satanism. Portraits in his later years show him wearing a symbol of the Baphomet around his neck. Pike, however, did not believe the Baphomet was Satan. In Morals and Dogma he explains that this symbol was misunderstood by those who were not adepts"; that it was "invented ages before, to conceal what it was [too] dangerous to avow."

The Palladian Rite provides an intensified hands-on course in "fleshly glove" demon possession leading to walking/talking possession of human initiates by Lucifer-associated spirits, demons. Pike was said to be a Satanist, who indulged in the occult, and he apparently possessed a bracelet which he used to summon Lucifer, with whom he had constant communication. He was the Grand Master of a Luciferian group known as the Order of the Palladium (or Sovereign Council of Wisdom), which had been founded in Paris in 1737. Palladism had been brought to Greece from Egypt by Pythagoras in the fifth century, and it was this cult of Satan that was introduced to the inner circle of the Masonic lodges.

In his book Masonry "Beyond the Light", William Schnoebelen (now a saved Christian) talks about his experiences as first a Satanist and then a Mason who passed through nearly all the Mason Degrees, including some that American Masons are unaware of; such as degrees in Masonry like the Egyptian rites of Masonry and the Paladin. During his initiation into Palladium Masonry William sadly admits to standing with Masons, some who were also satanists and chanting; "Glory and Love for Lucifer! Hatred! Hatred! Hatred! to God accursed! accursed!accursed!". He says that hashish provides some of their "illumination", taking after the 1st "Illuminati" 18th century Mason Adam Weishaupt.

The hideous occult idol known as Baphomet (above) is the most widely used of all Satanic symbols. The Satanic Bible instructs satan worshipers to place the Baphomet on the wall above the altar during Satanic rituals. Every time we see the symbol of the Baphomet we should be reminded of the connection between Freemasonry and Satanism. Baphomet represents Masonic wisdom and is, in effect, their god, whether recognized as such or not.

As do most occultists, Albert Pike had a "spirit guide," who dispensed "Divine Wisdom" and enlightened him regarding how to achieve the New World Order. A spirit guide is a being who meets someone who has given themselves over to the practice of the occult; however, people who are practitioners of the New Age Religion do not view this as a bad thing. In fact, they would strongly argue that they are filled with happiness and joy by interacting with their spirit guides.


This board is not in use

If you press "Preview Message," you are taken to a preview screen where your
message is shown to you before allowing you to post it.
Your message is not finalized until you click "Post Message".